Writing Your LifeNow is the time to write your life story… I can help!

Writing Prompt: The Third of May 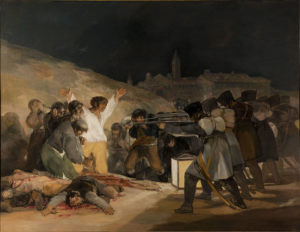 Today is the third of May, 2018. Did you know that one of the most influential, revolutionary paintings in art history is titled The Third of May 1808?

Francisco Goya’s The Third of May 1808 commemorates a Spanish uprising against French occupation and depicts a moment when French soldiers gun down captured Spanish revolutionaries.