I’m a writer, but I feel at a loss in describing our time on the Writing the Waves cruise aboard Royal Caribbean’s Freedom of the Seas. For every one thing I write, I feel as though I’m leaving out ten equally important moments. But as inadequate as it may be, I want to share a bit about the cruise with you.

Eighteen Writing Your Lifers boarded the ship on Sunday, May 12th ready for adventure. (See our online photo album here…) 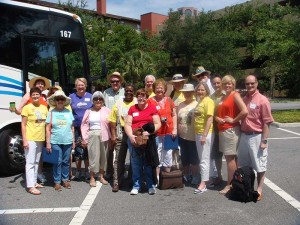 As the Freedom of the Seas sailed toward our first destination, Labadee, Haiti, the group spent our first full day at sea learning about the elements of good writing and travel and nature writing. A formal dinner that night gave us the opportunity to get all dressed up and looking good. 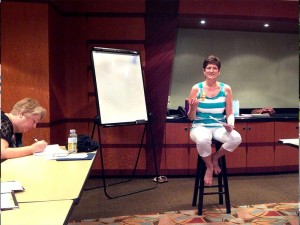 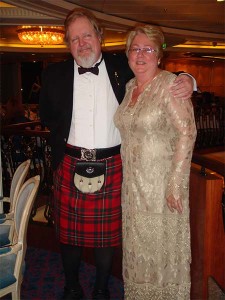 For the next four days, we hopped across the Western Caribbean, visiting Labadee, Haiti; Falmouth, Jamaica; George Town, Grand Cayman; and Cozumel, Mexico, and learning about the cultures of these countries, snorkeling, going on adventures, and enjoying the uniqueness of each destination.

After a full day at sea, spotting the coastline of Haiti was thrilling. On the beach, Bob and I sat under a tree and read—it was a heavenly indulgence—as Carole and Cory Mayback stretched and posed in a beach yoga class. Debbie Roberts and Marc Gould tried jet skiing while Norma Beasley, Judy Otto, and Robin Ogilvie experienced the flavor of Haiti. 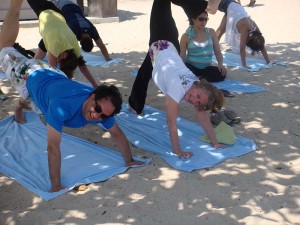 Our next stop was Falmouth, Jamaica. Many of us lined the deck and watched in awe as the captain turned our magnificent ship around and backed it up alongside the dock. I can’t even parallel park a car much less a 1,112-foot floating hotel. With the ropes secured, we scattered like ants to absorb as much of Jamaica as possible in seven hours. 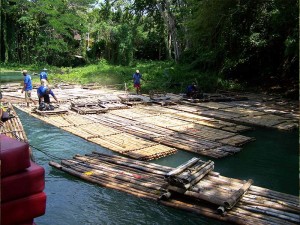 Barb Robertson, Wendy Weiler, and Judy spent a lazy day cruising down the Martha Brae River on a thirty-foot bamboo raft piloted by colorful Jamaican guides who introduced them to the country’s history and culture. Wendy even got an offer she had to refuse, so she could return home. Bob treated himself to a round of golf at historic Rose Hall Plantation’s White Witch course where, with a caddy’s help, he played an amazing round. While Bob was outside at Rose Hall Plantation, Robin toured the inside of the residence and learned about the colorful characters who called the place home. Norma plugged into the heartbeat of Jamaica with a comprehensive tour while our adventuresome team—Debbie Roberts, Jennifer, Brian, Carole, Cory, and me—flew through the tree tops of Cranbrook Flower Forest on ziplines and climbed all 600 feet of beautiful Dunn’s River Falls, arriving back at the ship only minutes before it sailed away. Yeah mon!

George Town, Grand Cayman provided the setting for a dream come true for Janet Rohrs; she became a certified diver. She spent time on the ship going through a learn-to-dive program, took her test, practiced in the ship’s pool, and finally in Grand Cayman, she slipped under the ocean’s surface for the first time and visited an underwater paradise. Way to go, Janet! 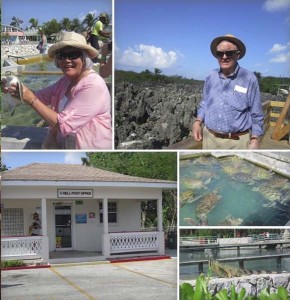 Most everyone’s Grand Cayman visit involved the water. Jim and Elsie Doherty visited the turtle farm and made new friends and later went snorkeling with Carole while Jennifer and Brian spent the entire day on a snorkeling safari. Jim and Elsie paid a visit to Hell, Hell, Grand Cayman, that is. Bob and I frolicked with the friendly residents of Stingray City.

The next day, Robin explored Mayan ruins in Cozumel, Mexico, while Janet swam through an underground secret river. Adrenaline soared as Jennifer and Brian flew across thirteen ziplines, drove dune a buggy, and swam in a water-filled cave. Marc, Bob, and I chose the less adventuresome route and watched The Wizard of Oz, Bob’s favorite movie, on the outdoor movie screen.

Seasoned cruisers, Becky and Bruce McGregor, spent much of their off days working on the mystery novel they are writing together. Collaboration went well except for the time Bruce wanted to kill off a character in a way that was a little too unique for Becky.

Our last full day of the cruise found us back at the writing table, composing effective description and learning about spiritual memoir. Both in class and throughout the week, participants wrote stories in response to prompts and assignments. If you’d like to read the work of these fine writers, click on the following links:

Since 1170 an Arbuthnot has lived in the town of Arbuthnot, in the Arbuthnot Castle, in Scotland. As a young child I dreamed of this castle. I saw tall towers, grand staircases with high ceilings and elaborate carvings. In 1972 my grandparents, on my father’s side, visited our castle and brought back pictures.

As I looked at the pictures, my shoulders slumped and I shook my head. My grandfather laughed and said “Not what you were picturing? It is kind of ugly”.

“Ugly is an understatement,” I replied. (Read more…) 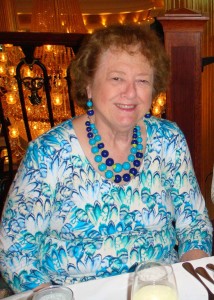 Have you ever watched a group of kindergarteners during group play?  It’s hard to resist their enthusiasm as they are introduced to toys and games intended to increase their knowledge of the world around them. At the same time they are unpredictable. They flit from one thing to another trying to experience everything possible. They follow the pack,each wanting to play with the same toy at the same time. This is a learning process. They discover how things work,sharing,cooperation,and skills they will need to exist in their world. They are also hard to keep up with. (Read more…)

Shortly after the end of WW2, Mom and I sailed to Europe, finishing our six week’s trip in England. London, still in a state of disaster, was hurriedly putting the finishing touches on her favored tourist areas while leaving the rest for later. We saw many bomb craters and ruined buildings. Leaving the city, we took a train to Shakespeare’s England. Passing a large ruin, I said, “Look at that! It must have taken a direct hit!” Mom exploded in laughter as she began to describe the ancient castle, left as it fell centuries before. (Read more…)

There’s a difference between the speculative ‘what would you do if you see a bear’ and what you actually do.  Everyone you talk to has or has heard different techniques to keep from becoming a bear snack.  Some say that to avoid them you should carry bells and keep talking.  Others swear by bear repellent, which is really just an expensive, industrial-sized pepper spray, or they say to carry a big gun.  But when it comes down to it, luck and good fortune are your best bets. (Read more…)

Over a meal, a cup of coffee, or a refill from the machine that featured 150 different flavored sodas, we learned a lot more about each other. Here are a few highlights:

Here are some of the comments by Writing the Waves participants:

Becky McGregor: The class on travel and nature was excellent and very applicable for the cruise. Patricia, you always seem to teach me something new, and I love that. We had a wonderful time. It was fun to have other people on the cruise that we knew. I know you put a lot of effort into this trip and it showed. You always do such a great job.  Thank you.

Norma Beasley: Every opportunity helped me become a better writer. My goal many years ago was to find the right class and teacher. The students have been icing on the cake. You did a great job. As [the cruise was] a new life experience, I thoroughly enjoyed the exposure. Being on the high seas was reflective. The food and choices were great. Our cabin was always clean. The animal towels added a note of surprise and delight.

Judy Otto: What I liked most about the cruise was having more time to spend together and time to sit and write in leisure without any daily distractions. The anatomy of a story workshop was a much needed review, and the nature writing and writing description classes were excellent. The experience of studying the bunny [a food sculpture] made it obvious to me that I am too literal and need to work on my figurative language. Studying this object for ten minutes made me look at details in a new way. It was a fantastic trip.

Barb Robertson: I loved the fellowship of the writing group. You did a thorough job with the writing workshops, very informative.

This first Writing the Waves cruise was an overwhelming success, and I’ve already started planning the next one. Where would you like to cruise and write? What workshop topics would help you with your life story writing? Tell me about it.

Write Your Life Story – The Basics